Disney March Maleness voting begins tomorrow in the Greek Gods section of the bracket. Below is a preview of the cutie-patooties that need your votes! To vote, just tweet your choice using the hashtag #DisneyMarchMagic. Be sure to @ mention the guy you’re voting for so he feels the Twitter love! The man with the most votes in each match moves on to the next round. 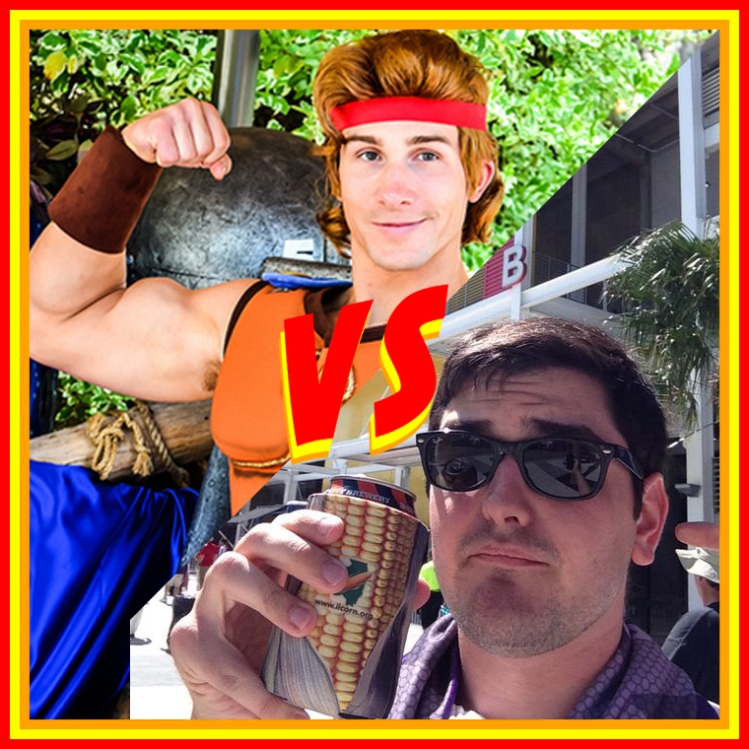 Why You Should Vote for Hercules: Look at that body. Also, I’m told he’s been voted Person of the Week in every Greek opinion poll.

Why You Should Vote for Steve: He’s a music teacher, which is pretty much the most adorable profession a man can have. Also, he brews his own beer, so you would save a ton of money if you dated him. I don’t know about you, but I’m a sucker for a guy with black hair and glasses. Lastly, Steve’s Twitter profile pic features him with a cookie. That’s really all I need to know.

Why You Should Vote for Rob: A British beefcake who has been know to take a few gym selfies in his day, Rob is also a very talented graphic designer. I own a t-shirt with his Maelstrom design, and it’s like he’s close to my heart when I wear it. Alas, gay marriage is legal in the UK, which sadly for us means he will be off the market very soon. Rob is getting hitched, but that doesn’t mean we can’t dream of him wearing a nice sweater and talking to us about turkey legs with a fetching British accent.

Why You Should Vote for Lou: Good things come in small packages, right? Lou’s a nice guy, who does lots of projects for charity. He brings members of the Disney community together at his many meet-up events and in the chat section of his live podcast streams. Also, that voice! Give him a listen and you might start wondering what sweet nothings he might whisper in your ear.

Why You Should Vote for Keith: As a co-host of the hilarious Disney Hipster Podcast, Keith brings a perfectly briny sensibility to everything he does. Think of him as a Nihilistic class clown with piercing blue eyes and a wit as sharp as Wolverine’s claws. He’s got a bit of the bad boy angle too, so really Wolverine is a good comparison. Don’t get your hopes too high though—this Disney hottie is married to his Disney Hipster co-host Jamie. And if I know Jamie, she’ll cut you if you get too close to her man!

Why You Should Vote for Joe: Joe is the guy who is the first to volunteer for everything. He’s a classic nice guy—always smiling, always ready to offer a warm hug. Really, he’s the Olaf of the Disney community. Joe hosts the Dreamer’s Podcast, which brings you inspiring stories of people chasing their dreams and overcoming adversity. It’s the perfect outlet for his boy-next-door personality. Plus, he runs marathons so you know he’s got stamina. But unfortunately, he’s taken too. But what did you expect? All the nice guys are taken, right?

Why You Should Vote for Lorenzo: This Brooklyn boy knows how to treat a lady like a princess! He should—he works as a character handler in WDW, so he spends a large part of his days with the princesses of the most magical place on Earth. Lorenzo is a bit of an Instagram celebrity, with over 4,000 followers. It’s clear that the masses are in love with his cool styles and model good looks. He’s straight and (I think) single, so be sure to let him know how you feel, ladies! Who knows, you might just get to experience the #FestivalOfLorenzo.

Why You Should Vote for Len: The man behind Touring Plans has got you covered—he’s a bona fide genius, an author of travel guides that have sold millions of copies, and one of the most generous guys around. Len is a man you’ll want to cuddle with in his palatial North Carolina estate. Forgive the fact that he’s a Steelers fan and create a touring plan of love with this entrepreneurial mensch. Just don’t get too cozy… Len is taken. Sigh. We’ll always have the All Star Resorts, Len.